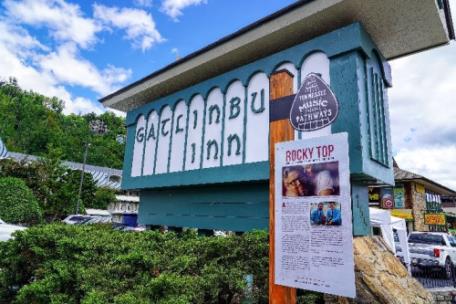 By: Ricardo J. Ohman
In: Tennessee tourism
Tagged: department tourism, tennessee department, tourism development
With: 0 Comments
The Tennessee Department of Tourism Development kicked off the first annual Gatlinburg Songwriter Festival with the unveiling of a new “Tennessee Music Pathways” marker to honor the historic Gatlinburg Inn and Felice’s “Rocky Top” legacy and Boudleaux Bryant. Janelle Arthur, Hits & Grins, the All-Star Bluegrass Band with Jerry Salley, as well as local and state leaders were on hand to mark the special occasion.

“There are very few songs that people know when and where they were written, and ‘Rocky Top’ is the exception,” said David Cross, co-owner of the Gatlinburg Inn.

“As a Tennessee State Song, it is important that it be commemorated here today so that the Gatlinburg Inn is always known as the birthplace of this great Tennessee tradition.”

Among the most famous bluegrass songs of all time, “Rocky Top” was written in August 1967 in room 388 of the Gatlinburg Inn. Originally recorded by the Osborne Brothers, it has become a standard.

Although “Rocky Top” shares a certain resemblance to Appalachian folk songs and violin tunes, it was written by the husband-and-wife team of Boudleaux and Felice Bryant. Known as some of Nashville’s first professional songwriters in the early 1950s, the Bryant’s wrote hits for the Everly Brothers (“Bye, Bye Love”, “All I Have to Do Is Dream”, “Wake up, Little Susie “), Roy Orbison (” Love Hurts “), Buddy Holly (” Raining in My Heart “), Little Jimmy Dickens (” Country Boy “,” We could “) and many more.

In 1967, Archie Campbell, the singer-comedian-TV star from East Tennessee, asked the Brantys to write ballads for his upcoming album Golden Years. The Brantys often spent part of the summer in the Smoky Mountains, staying at the area’s oldest hotel, the Gatlinburg Inn. They were working on Campbell’s album when they decided to take a break with a bluegrass-style song. In ten or fifteen minutes, they finished “Rocky Top”. For them, it was an absurd song about a fictional place.

In Nashville, the Bryants lived near bluegrass singer Sonny Osborne of the Osborne Brothers. They went to his house with “Rocky Top” and Sonny liked it enough to call his brother to repeat it. The song was recorded on November 16, 1967 and was released shortly before the end of the year. The Osborne record peaked at No. 33 on the country charts, but became a standard, recorded by many artists and performed by many others.

The University of Tennessee’s Pride of the Southland Band first performed the song at half-time in a football game against Crimson Tide at the University of Alabama on October 21, 1972. Musical arranger Barry McDonald, who had worked on the Johnny Cash ABC TV show, created the arrangement. Quickly, he became a staple in every game. Bryant’s heirs later gave the university the right to perform the song royalty-free as often as circumstances demanded.

On February 15, 1982, “Rocky Top” became one of the official songs of the State of Tennessee.